Hello, fab readers!  I will be attending the Jazz Reggae Festival on Memorial Day next week and I’ll be scouring the crowd for fabulous style!  Be you, and bring the color and prints as that will get you a possible spot on my slideshow.  Be Jammin’!

From The Desk of the Style Goddess, SG Event, SG Fashionista

The Met Ball or Costume Institute Gala, celebrates the Met opening of the fashion exhibit at the Costume Institute and is considered the Oscars of the East Coast.  A lot of the women looked older than they are due to the look they chose and/or makeup.  I was looking for colorful standouts and I selected my favorites.

From The Desk of the Style Goddess, SG Review

Great article of inspiration from http://newcolorrevolution.com!

“The greatest revolution of our generation is the discovery that human beings, by changing the inner attitudes of their minds, can change the outer aspects of their lives.” –William James

New Color Revolution is a stylish cause-marketing campaign and experiment in social activation fueled by the embrace of a colorful life. The goal is to spark a popular fashion movement promoting the value of being expressive, confident and aware, one that accelerates a vibrant state that enhances the quality of life while at the same time liberating us from anything that can hold us back. This uprising is undertaken not only for personal fulfillment, but also for the creation of a bright, hopeful and prosperous society. It is a highly-visible response to life that manifests across music, food, fashion, art and design to generate a more enlivened environment and more optimistic conceptions of beauty, truth and goodness.

This Revolution is fashion on a higher vibration and a fashionable practice that keeps us firmly in the vivid colorflow. Color expresses a primal emotive need. Wearing it and creating colorful environments satisfies in more ways than we can imagine. This passionate revolt into style is creative resistance with a liberating battle cry to colorized the fortified system of expressive inhibition in which the same tenured forces of the bland limited spectrum have been entrenched for years. This vivacious activism may be seen as extreme to some but compared to the void of the black hole it offers a most sensible Utopian solution to all the bleak dissolution that prevents us from stepping into the luminous future.

This is so because color beautifully expresses who we are. We are the colors we surround ourselves with and that we wear. Color immediately shows how much we feel and we care. In the Year of the Dragon, color is exploding in design, decor, art, and fashion, and with it a new color consciousness. We don’t just put on clothes anymore. We would never settle for boring white walls. We can’t see in the same old way. Once you see the lack in basic black you’ll never go back. Once you know, why settle for the status quo? Why not be seen and heard? You don’t even have to say a word. When we communicate with color we are understood, directly and dynamically. We see and feel the vibe. In a room of bland gray and blackness we are truly distinctive; reading, seeing and feeling the true hues between the lines. This is light by design moving at the speed of life; a lifelight that shows we can dance in the fire, that shows off a burning desire and gives us fever through the night.

From The Desk of the Style Goddess

Peep This – Interview with Orenthal Goff

When I first moved out to LA, I was looking for modeling opportunities for exposure.  I responded to an ad for a photo shoot of a clothing line and that’s where I met designer Orenthal  (Orencio)  Goff.  Unique in his style, design and outlook on life, I helped bring to life  O’Peepers Couture– skirts with a twist.  Not only is he a designer, but he sings, dances and who knows what else?  Read on to learn more about this man-on-the-move.

1.     How would you describe your clothing line?  O’Peepers Couture – cutting edge, one of a kind, and universal.

2.    Who are your top 3 favorite designers? Alexander McQueen,  Roberto Cavalli and Halston.

3.    What article of clothing in your closet makes you feel on top of the world? Jacket from Lourdes for $1800.  Just says everything and I get compliments every time.

4.    If I were to enter your closet right now, what would I be surprised to see? Not that many clothes – did a Brad Pitt post Jennifer.

5.    How much influence does the way you dress have on your personal brand? None at all.

Me wearing one of the O’Peepers skirts

7.    How does Indianapolis style compare to LA style?  Indy is style in the making.

8.    In your opinion, what is the future of fashion?  Individuality.

9.    What would you never be caught wearing as long as you live? Hammer pants.

10.  What is your favorite clothing store in LA?  Sashi B.

11.   What fashion advice would you share with the world?  Be yourself, express yourself.

12.  What do you think is the new black?  Spirituality and individuality.

13.  What makes your clothing line unique from all others?  It’s designed, cut and sewn by me.

14.  As a musician, artist and designer, is your style different for each one? All incorporate a bit of my own style, it’s all me. 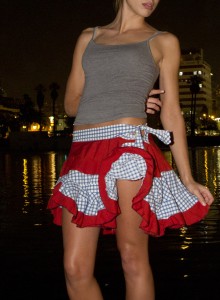 Orenthal Goff was born in Indianapolis, Indiana on September 8, early one autumn morning. He has been entertaining for most of his life young life. He moved to Los Angeles at the tender age of seventeen alone with sixty dollars and two suitcases quickly finding work in the film industry and singing demos for fun. Fun lead to work as the demo’s turned into records for different producers. Writing hooks and melodies is something that flows like water from him. Playing the guitar is his new found baby. Music and singing has always been a huge part of his life being raised in the church next to his Grandmother Virginia and having his ear tuned in to Casey Kasem Top Forty lead him to the world of pop music.

Training with San Francisco’s Razz Kennedy introduced a new sound to his already tenor soulful voice. Indiana gave him the musical roots of The Police, Diana Ross, Patti Labelle, Kiss, Duran Duran, Natalie Cole, Madonna, Janet and Michael Jackson and many others. California gave him the musical roots of Oingo Biongo, The Cure, Niki Haris, Kenny Chesney, Yazz, Mazzy Star, Lenny Kravitz, Bork, Kinky and the list goes on. His recognizable face as been the spokesman for Miller Genuine Draft, Lens Crafters Eye Wear and MTV to mention a few. His passion for performing has lead him to some of L A’s most known stages. His art for giving dance tracks a certain flavor has allowed him to record with a slew of talented producers. “Arena” is where he made his debut singing an original house track with DJ Fabian and a troop of dancers. This is where his fans begin to take notice and from there it’s been a whirlwind of creativity, music, spirituality, sexuality, and Self Love. Out of the ashes rises “The Rooster” ready to waken the world from sleeping!